“The new normal of staying at home and social distancing has put our social life in jeopardy.” Hanashiro writes in her newsletter. She quotes from The Old Man and The Sea: Hemingway writes, "He noticed how pleasant it was to have someone to talk to instead of speaking only to himself and to the sea." The old fisherman’s sentiment can now be felt more profoundly than ever. Whether it's striking a short conversation with a neighbor, or even handling mundane daily routines, many of us just miss those simple social interactions we have taken for granted. Instead of fixating on missing them, Hanashiro focused on what she can do with what she has. “I have been quite busy making Etegami. I made a lot of them.”

This post is the  Sachiko Hanashiro's Etegami fourth Collection. See our previous collections: The first collection: How The 300 Etegami Postcards Unplugged and Connected People in The Time of Quarantine

The second collection: Etegami in Praise of Fall by Sachiko Hanashiro 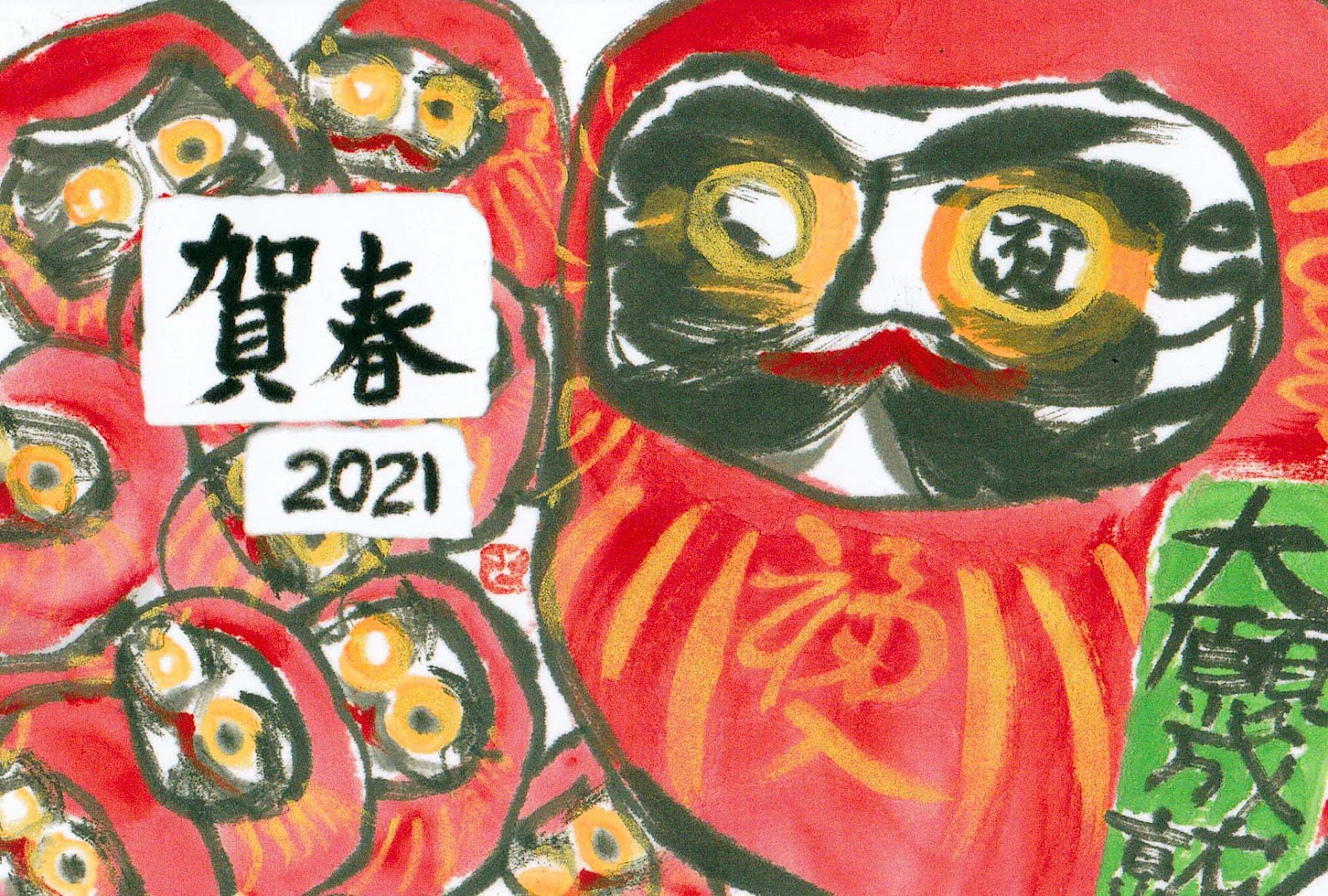 2020 is the year we will never forget. I hope that we can return to normal life, even if it's only a day sooner. 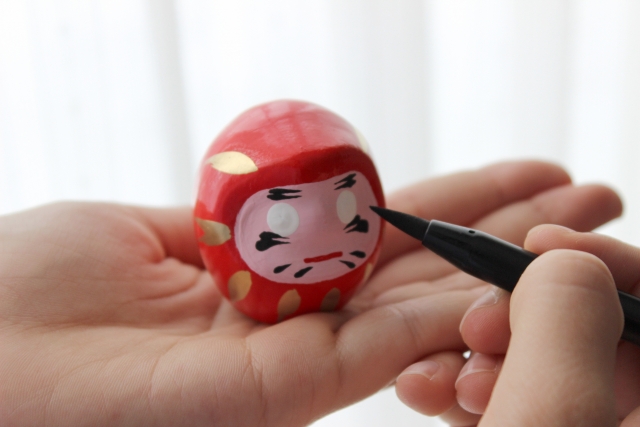 (Daruma is a traditional Japanese doll symbolizing perseverance and luck. The eyes are left intentionally blank, so a person can decide on a goal or wish and then they just paint one eye in. Once the goal is achieved, the second eye is filled in.) 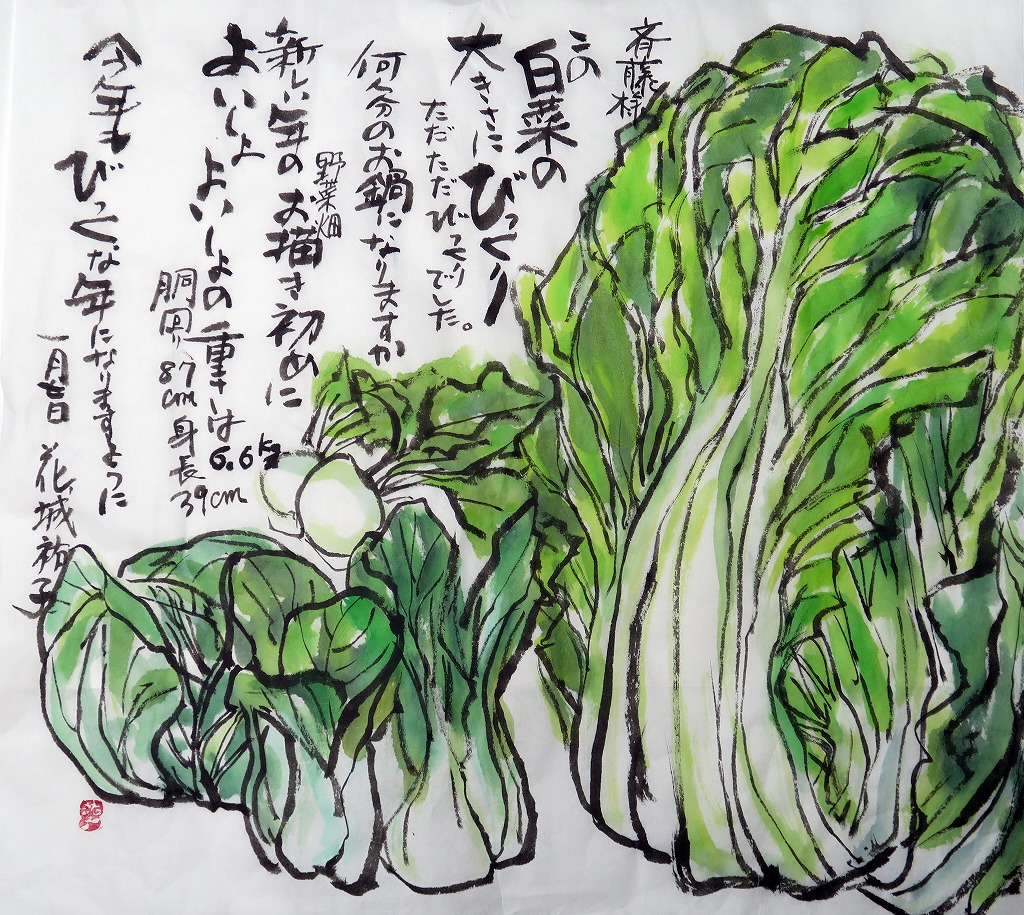 Dear Mr. Saito, I was speechless at the size of the napa cabbage you gave me. How many people can I serve when I make hotpot with it? It became the perfect subject for my first Etegami of the year, weighing 6.6kg(15Lb), and measuring 87cm(34In) in circumference and 39cm(15In) in height! Hoping this year will be as amazing as this veggie is!
January, Sachiko Hanashiro

My first Etegami of the year is a giant napa cabbage of 15Lb! 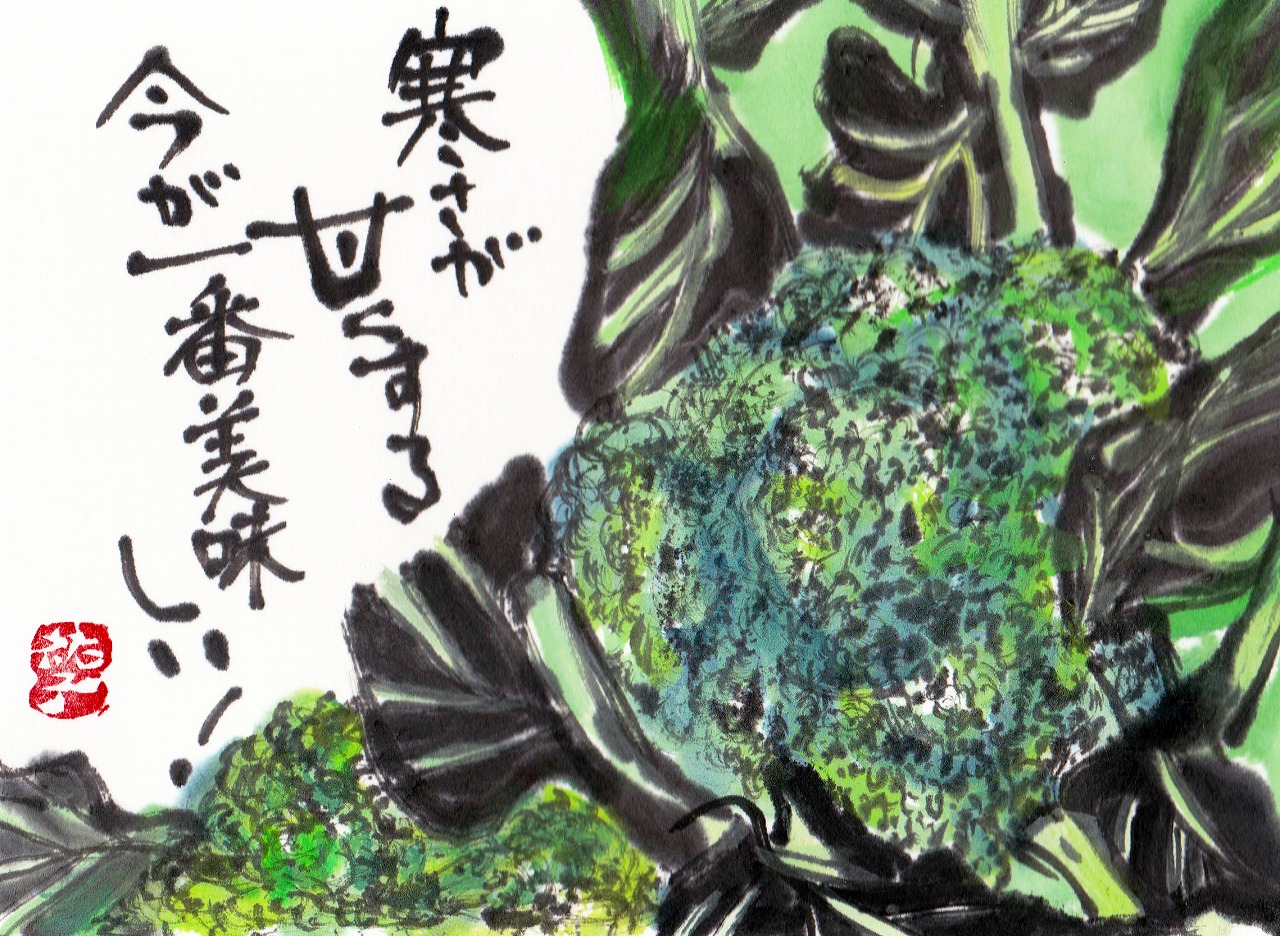 Cold weather makes flavorful vegetables. Broccolis are best at this time of the year!

I received large broccolis from Mr. Saito’s field in Sengawa district in Tokyo. According to him, low temperature plays a big role in delicious broccolis. 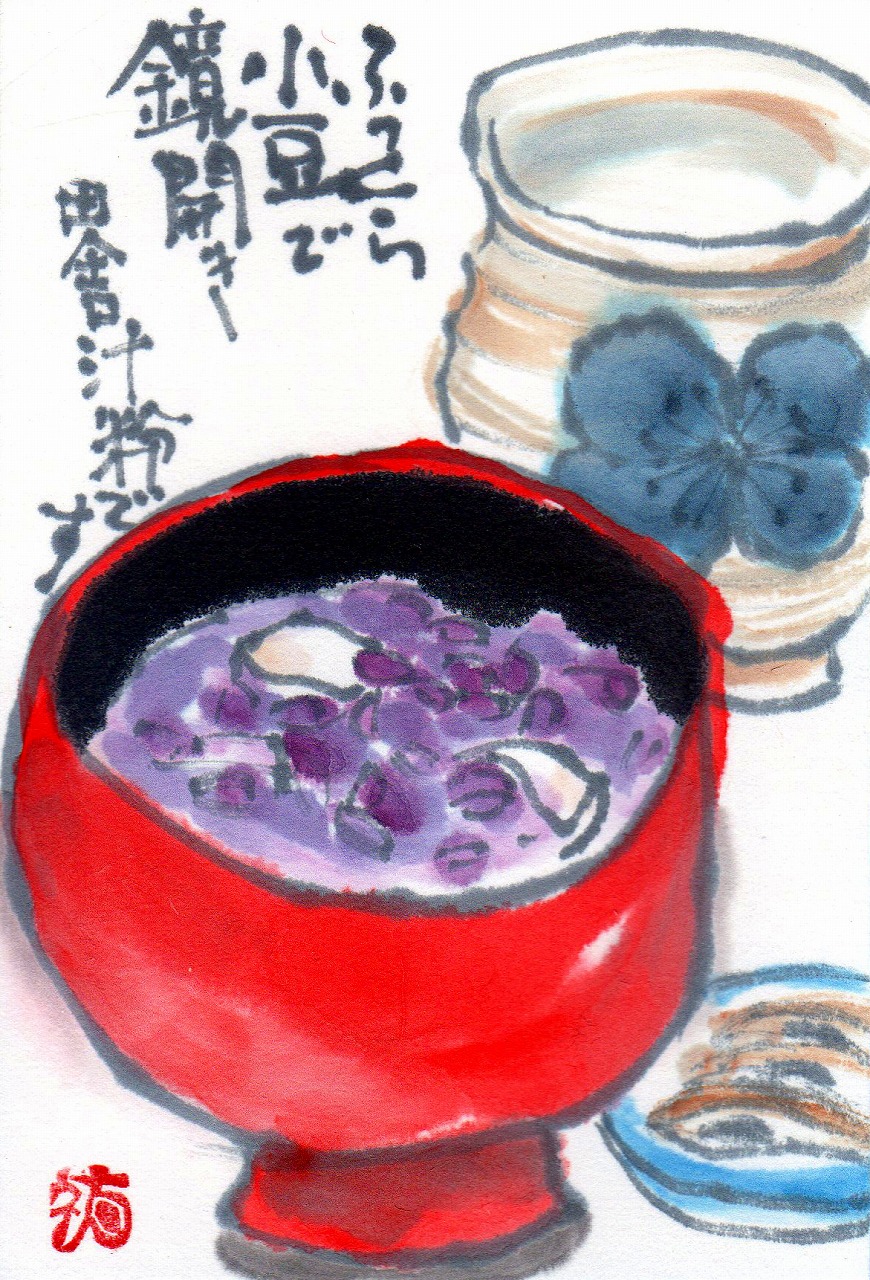 At the end of the new year, I prepared sweet red-bean soup out of the "Kagami Mochi", which is a preserved mochi believed to bring good health and happiness to the family. I serve the soup in a lacquered bowl on the side of green tea in my favorite cup. I bought the cup while exploring potteries in the Kyushu region. It was a long time ago! 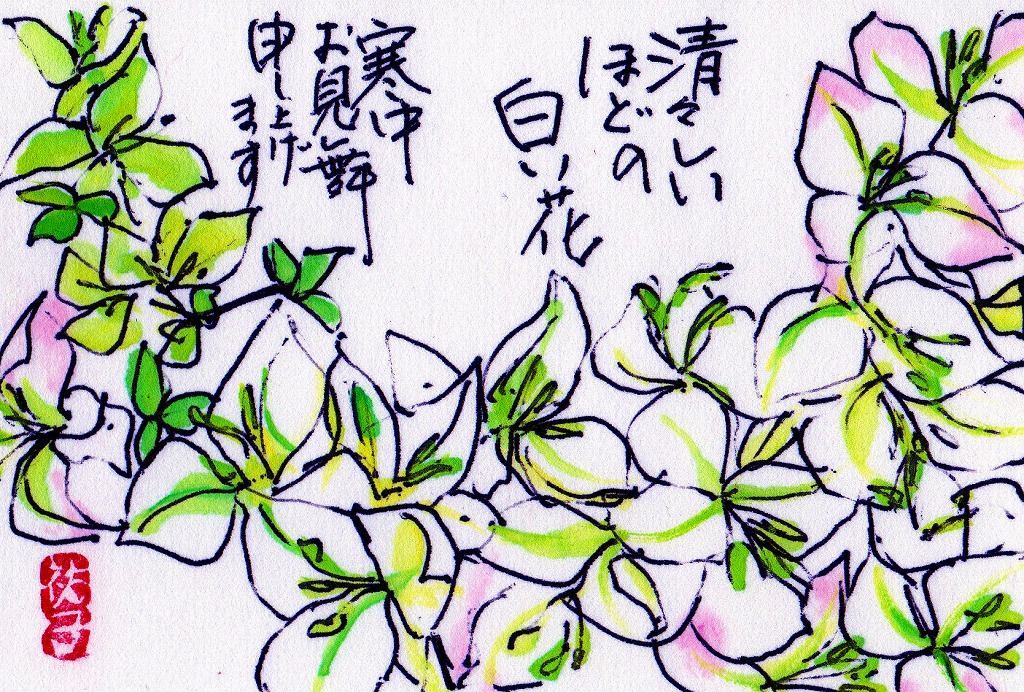 Snowy white flowers that are almost vitalizing. Warmest greeting for the mid-winter season.

I placed my pot of bougambilla in the VIP seat at the house, which is at the sunniest spot by the big window, and they are blooming! (In actuality, the “flower” is actually a calyx.) The flowers were pink at the beginning of the winter, but after I brought them inside to avoid the frost, a lot of white buds appeared. Then I found some pinkish red at the tips of the flowers yesterday. 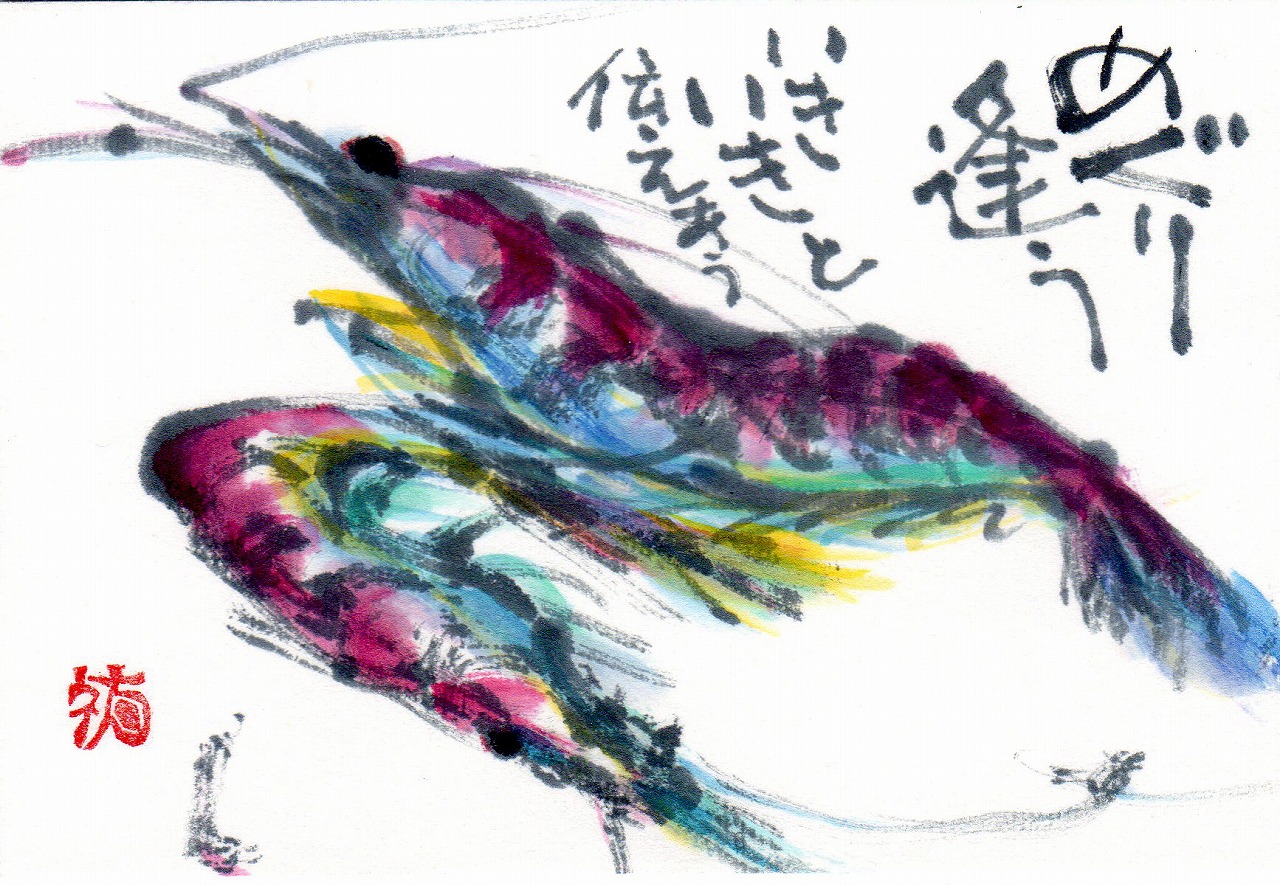 A fated encounter. We understand each other.

I love drawing fish. I want to be as exuberant as them. 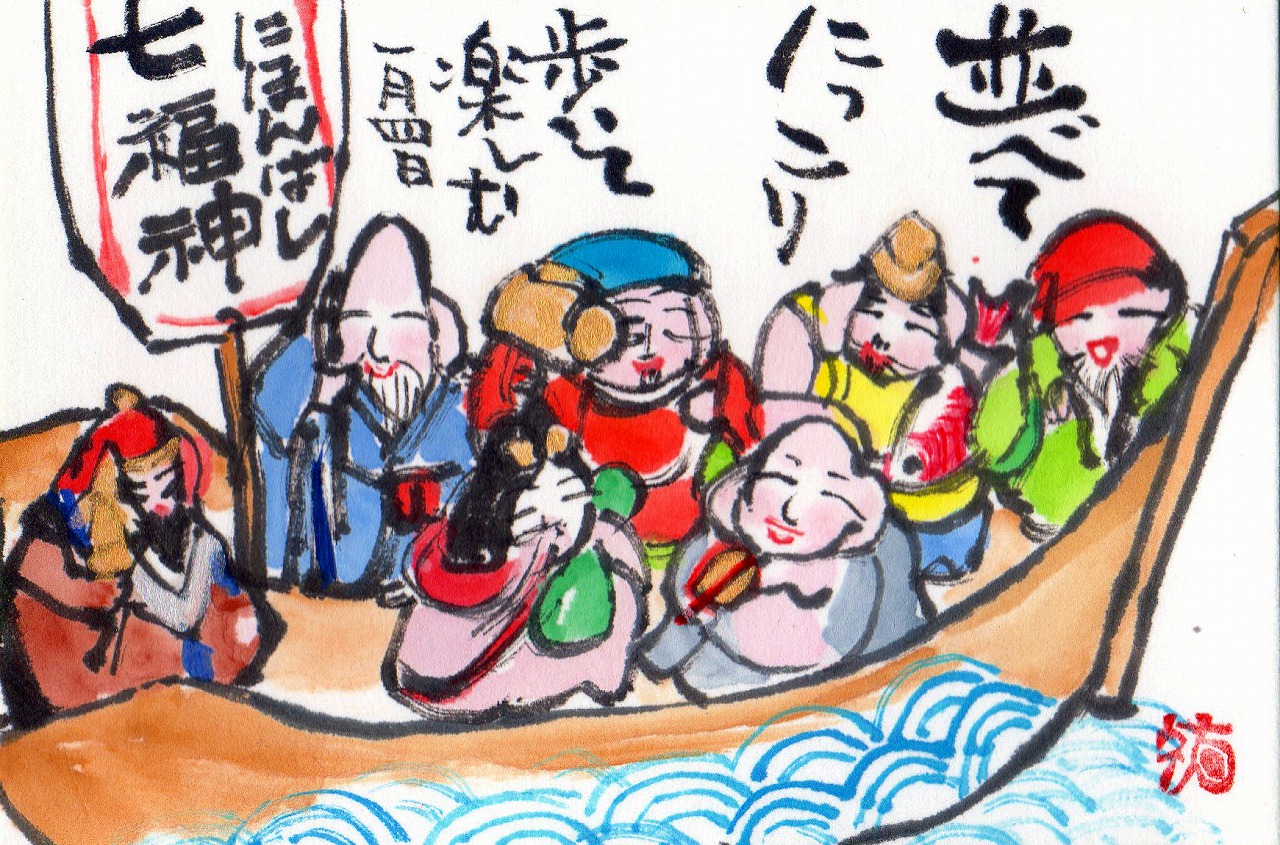 Lined up and Smiling. I went for a stroll on January 4th. Seven Lucky Gods from Nihonbashi, Tokyo

I visited seven shrines in the Nihonbashi area to purchase Seven Lucky God dolls at each of the shrines. I arranged them on a boat ornament. 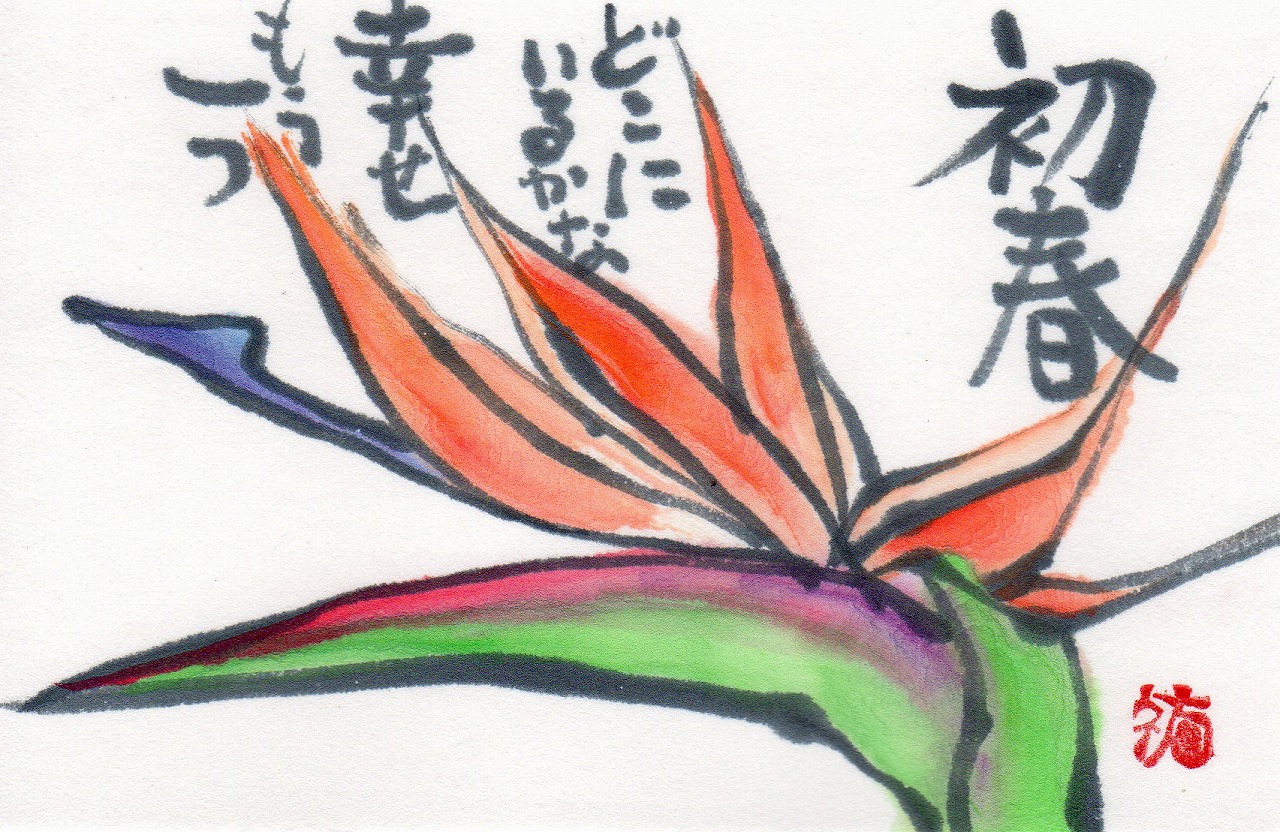 The beginning of spring. Where can we find happiness once again?

Strelitzia, the bird of paradise flower. What will this year be like? 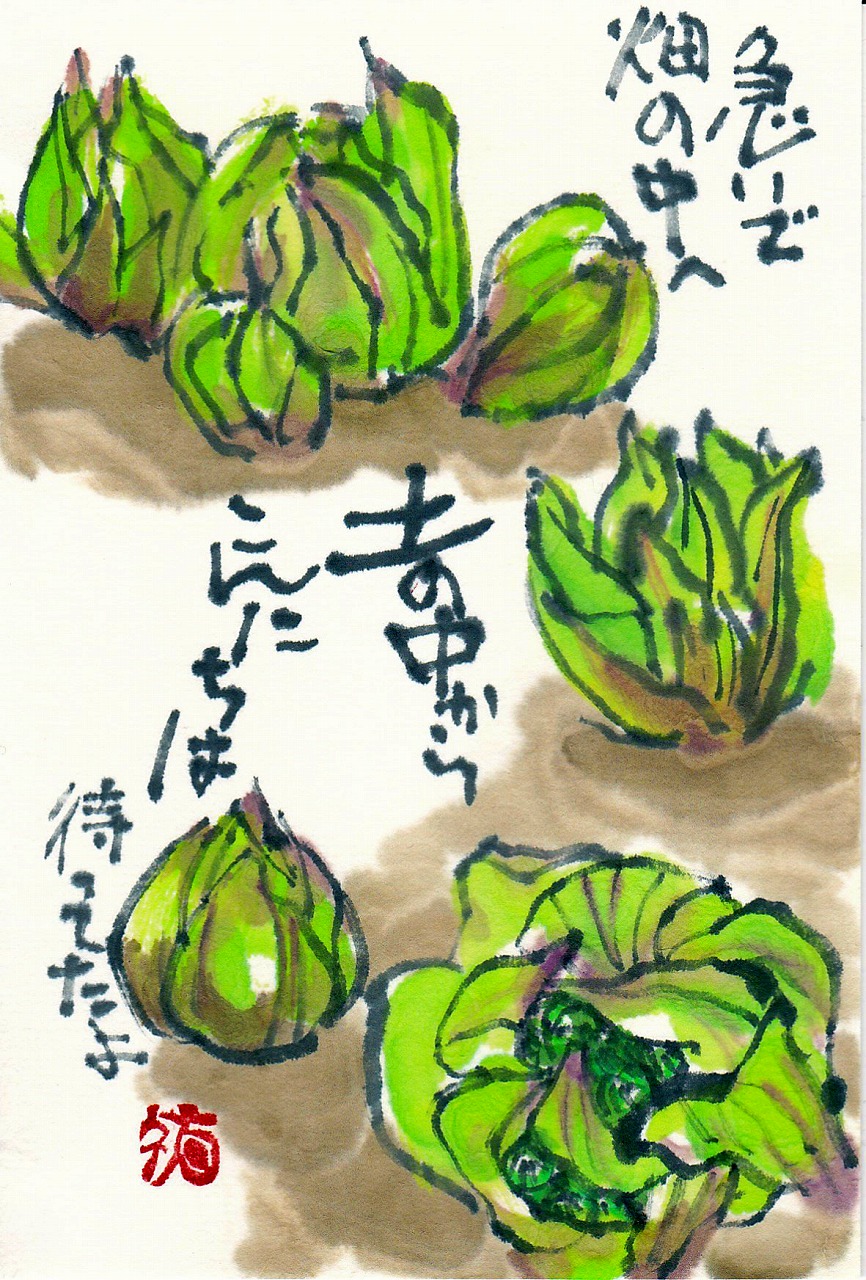 I hurried to the field. A Greeting from the ground, “We were waiting for you”.

I felt the warmth of the fertile soil and connected to life through the butterbur sprouts. The young green leaves were shining. I made tempura with the fresh picked butterbur sprouts, and they were flavorful with just the right amount of bitterness to make me feel that the beginning of spring was here. The birds were chirping quite lively. Today, I appreciated life fully with my five senses (sight, sound, smell, taste, and touch). 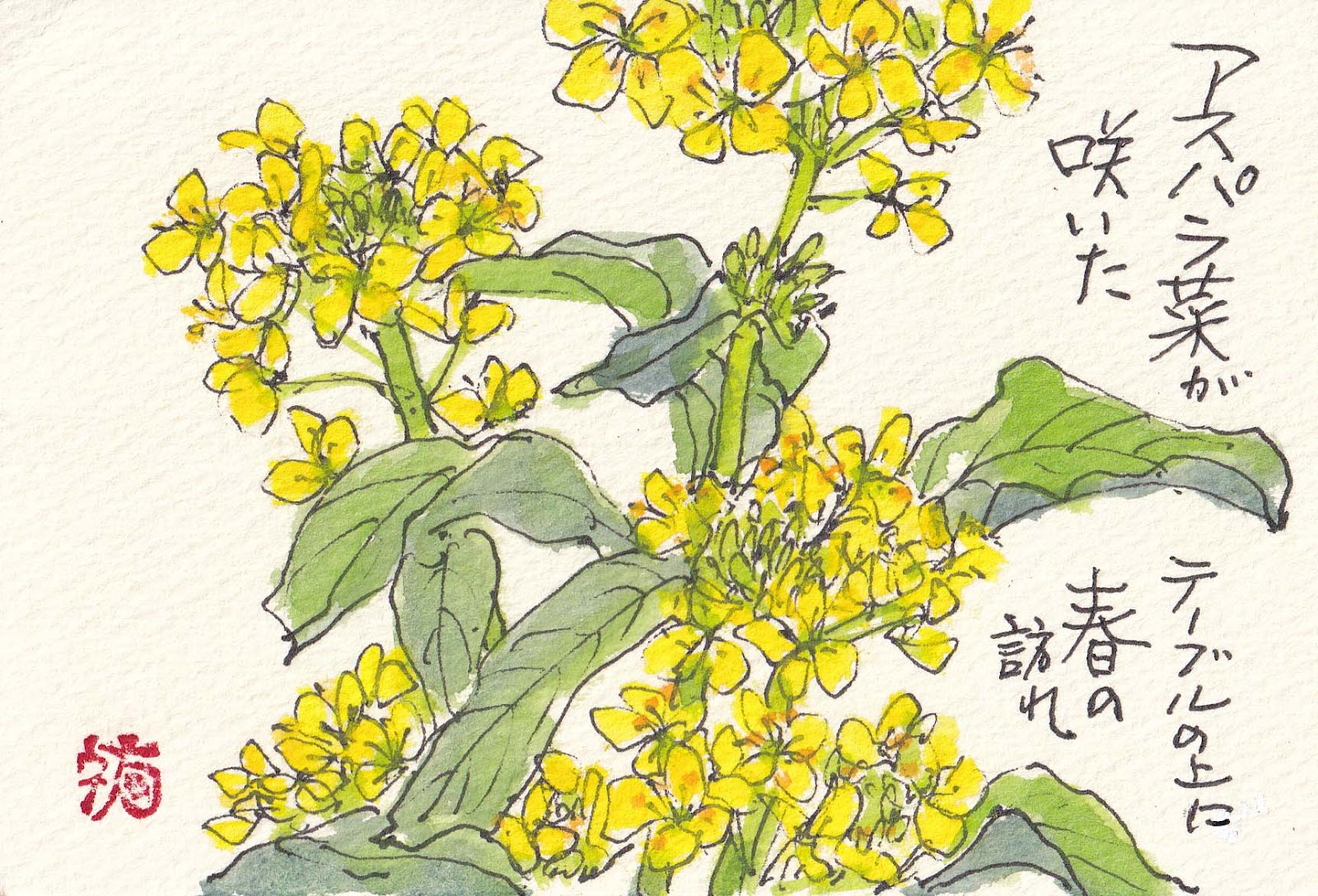 Canola flowers are blooming. Spring has come to my table.

The canola flowers and their leaves look so tender. I boiled them to serve. The small flowers were yet opened when I purchased them, then soon after I put them in a glass, small yellow flowers started blooming one after another. 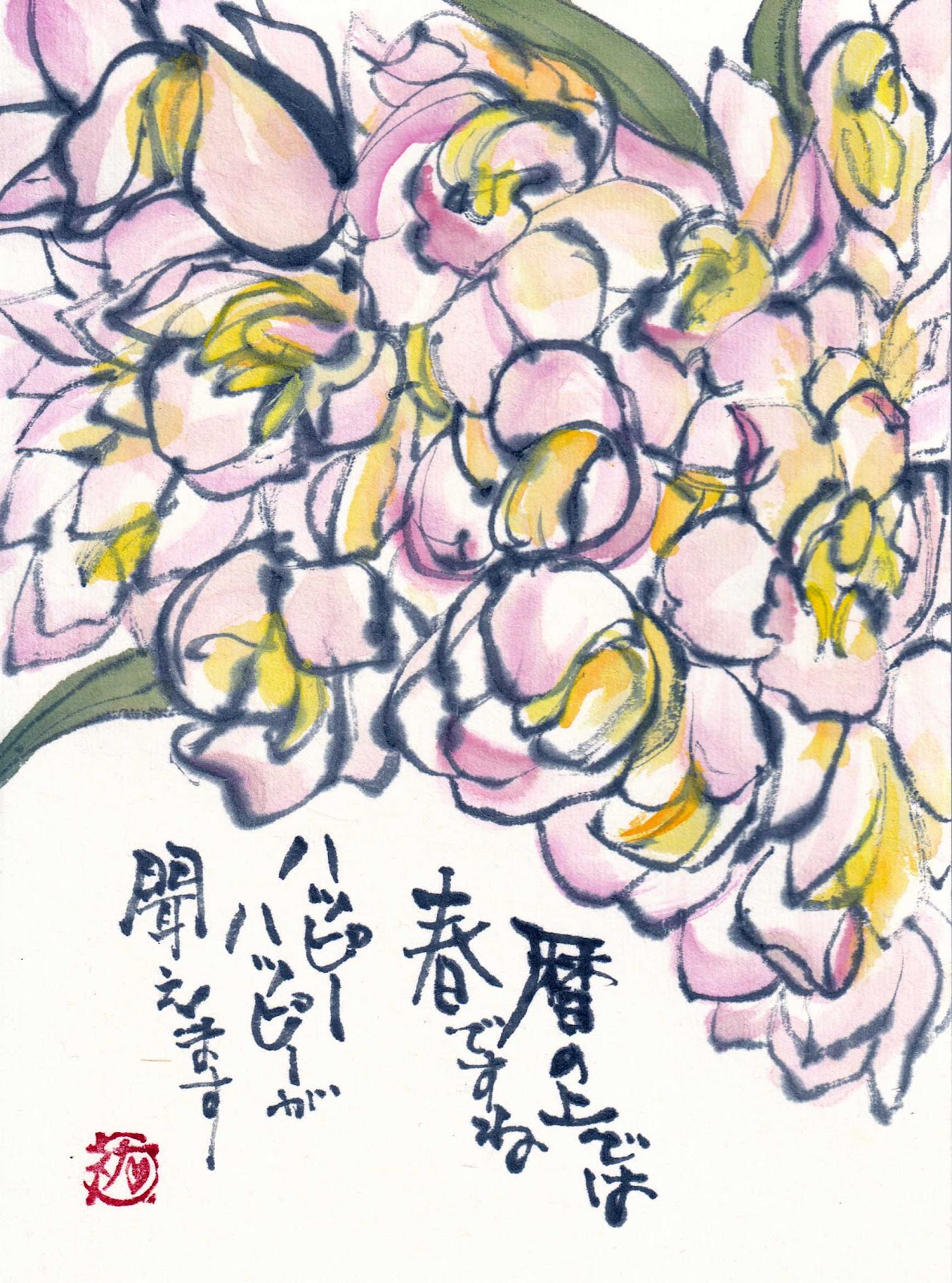 It’s officially spring according to the calendar. I heard somebody say “I’m happy”.

I was given a beautiful boat orchid. My family is having several events in the spring, including birthdays of my grandson’s and mine. I hope the boat orchid will warmly watch over us. 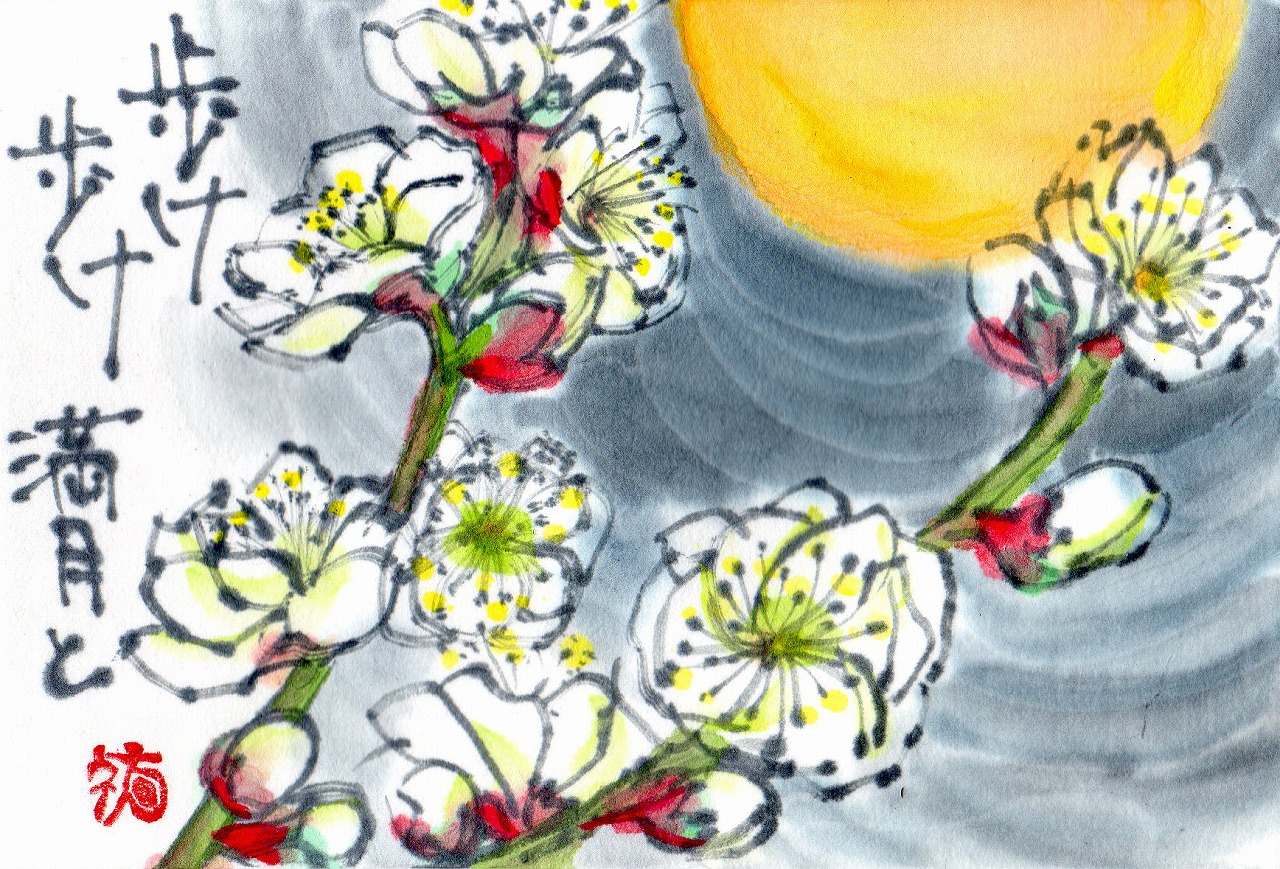 Let’s keep walking under the light of a full moon.

I know I need more exercise, but I kept making excuses! This evening, I decided to take a long walk, and I was well rewarded. Look at the beautiful full moon! The white plum blossoms seemed elegant in a different way at dusk. I walked 7,025 steps in an hour. 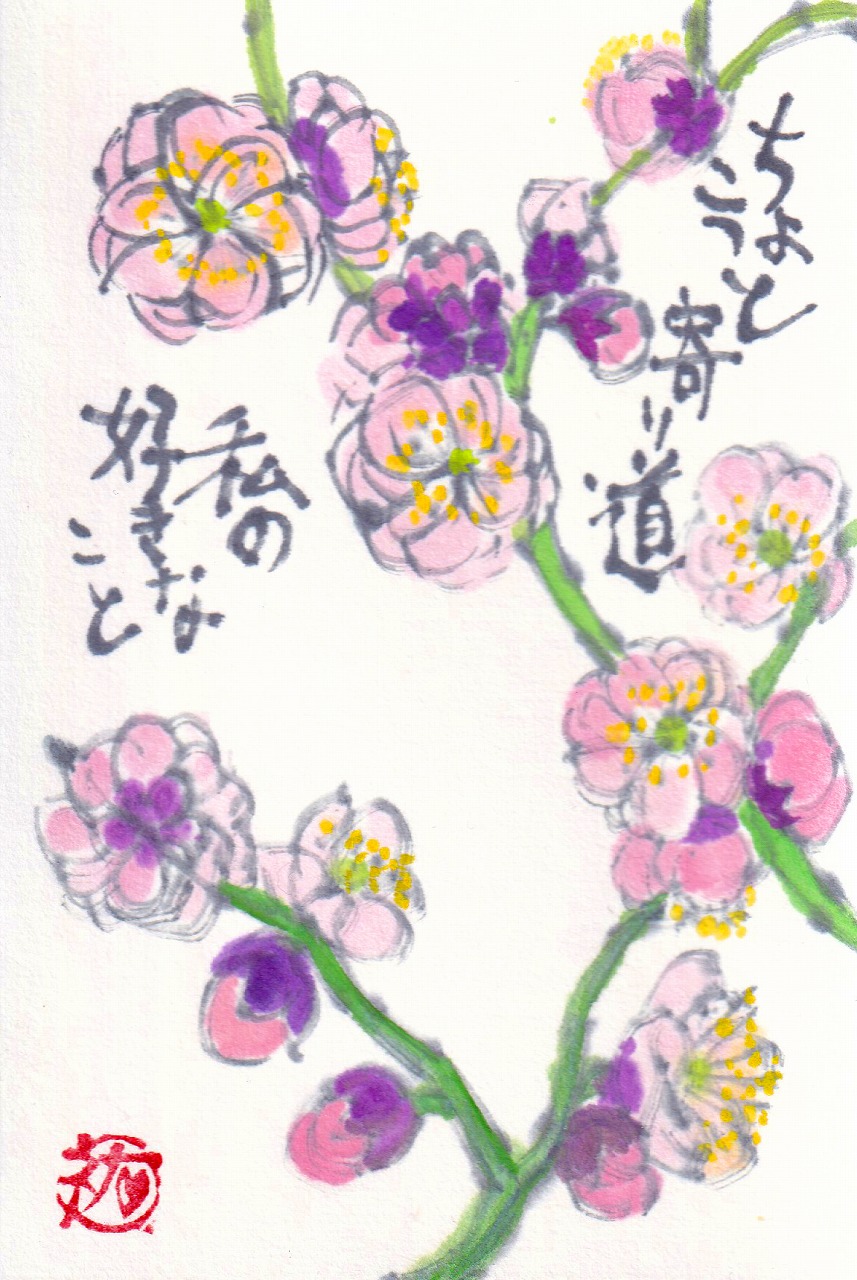 Took a short detour. My favorite thing to do.

Although it is officially spring according to the calendar, what a piercing cold day today! I sketched plum trees at Saneatsu Mushanokoji Museum in the neighborhood. They are double plum blossom trees replanted from Saneatsu’s village in Saitama Prefecture. I learned that plum branches are green when they are pruned properly. 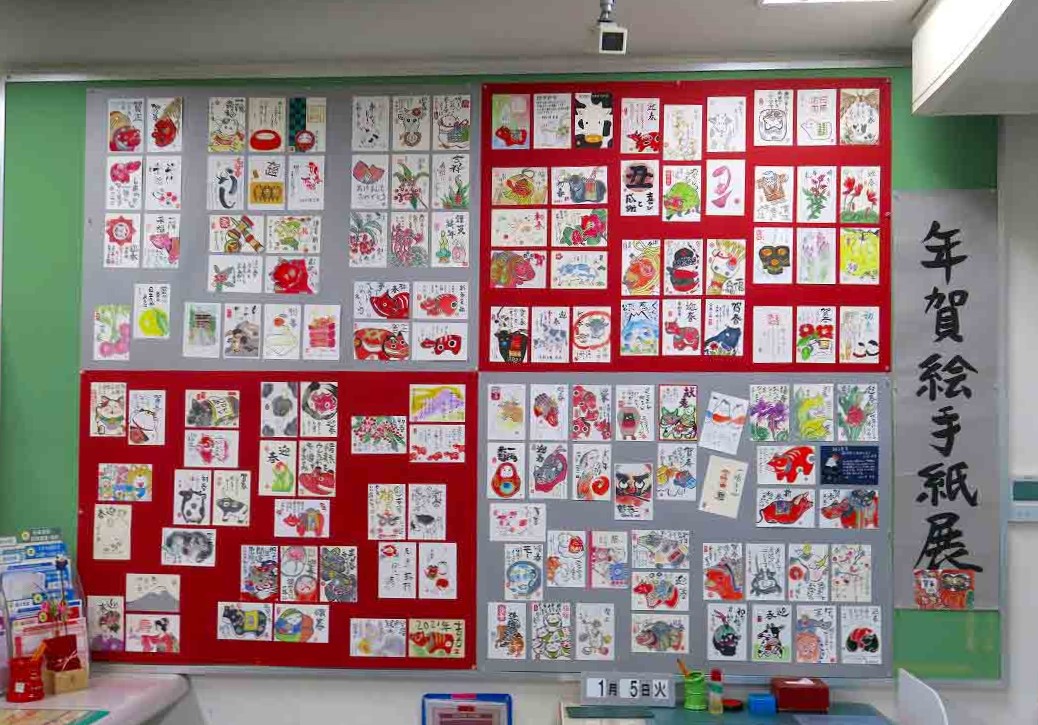 Every new year, I receive tons of Etegami greeting cards. I chose some from them to be displayed in our local post office at the request of the postmasters. This is the 24th year since the display took place for the first time. I hope people enjoy looking at them.

Based in Tokyo, Sachiko Hanashiro is a renowned artist and popular teacher of Etegami. She started making Etegami in 1985, and held her first exhibition in 1987. The number of students she taught online and offline is over 100,000. She is also the founder of the Etegami Flower Association, which she still runs. Her appearances on TV have helped to spread the culture of Etegami. In 2000, she was recognized with an award from the Ministry of Posts and Telecommunications for her contributions to the letter-writing culture in Japan.

Learn Etegami with us!

March of every year is National Craft Month! In celebration, we have put together 20 hilarious quotes that only crafters will understand - because life as a crafter can create some funny situations that we all know and experience.

Bring on The Bloom with These Spring Chigiri-e Motifs

Spring is in the air! After the long cold days of winter, celebrate the return of warm weather and flowers with Chigiri-e motifs covered in bright, colorful Washi papers that would be perfect to enter spring vibes into your home.

Japan has a long history of gardening, but the unique gardening culture blossomed during the political stability of the Edo Period (1603-1868). While many large strolling gardens with ponds, islands and artificial hills were built by nobles, tsubo-niwa (mini gardens) became popular among the urban population. Tsubo-niwa consisted of a few carefully arranged items such as stones, water basins, and plants. They have taken root in the townhouse gardens today.